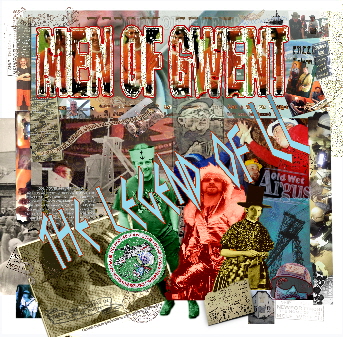 Men of Gwent musicians are:

On hearing the news of witch Thatchers death and after years living solely within in the Welsh Valleys, the Men of Gwent finally went to the big City of Newport. Fuelled only by Tiny Rebel Beer and Penderyn Whisky, the group recorded this incredible love letter to Wales.

Listen in wonder as Jon Langford and his all-star motley crew take you on a personal journey around central Newport, coastal Aberystwyth, rural Llanyrafon and the docks of Pill.

Fans of the 1970s will be pleased to hear the song “Adrian Street”, a tribute to the Glam-Rock Wrestler originally from Brynmawr who now lives in sunny Florida.

“This album was over 20 years in the making. When I first moved to Chicago in 1992 it was important to form a band in Newport so I could pop back over for band meetings in the Riv every week or so. Julian, Smartie and Me were LL and we wrote songs about our home town transatlantically and once and a while in person. We did maypole dances at TJs and sang songs of sheep sleeping in the vale and lady coalminers and screamed our abuse at the belching chemical towers of Rechem. This record the Legend of LL was meant to catalog the great songs we had written down the years but as we started the process of organizing our obscure past Matt, Guto, Erik and Barkley appeared from nowhere and we turned into a real band that played Glastonbury and Green Man and stuff and wrote new songs about our hometown and changed our name and made this record” says Jon Langford hippy legend and Gaer boy of note.